On a chilly Wednesday evening in early February, a quiet corner of Wimbledon was warmed by the rousing tones of Putney & Wimbledon Brass Band. 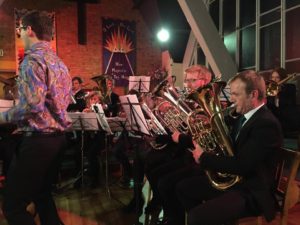 In Dundonald Congregational Church they performed in front of a packed crowd in support of the Wimbledon & District Guide Dogs, with several of the latter in attendance. Exceptionally well behaved they were, too – perhaps hypnotised by the musical director’s shirt as he led the band through a varied programme, expertly compèred by trombonist Elin.

Along the way, the audience was introduced to a mysterious cornet-toting water nymph (Rusalka’s Song To The Moon), beguiled by lyrical flugelhorn and euphonium solos (Ashokan Farewell) and, finally, sent dancing away to a medley of ABBA’s hits. This thoroughly enjoyable evening also raised just shy of £400 for the Guide Dogs association.