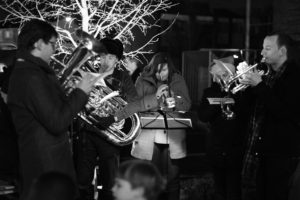 As 2017 draws to a close, Putney & Wimbledon Brass Band are reflecting on an incredible month spent spreading Chrstmas cheer to the residents of Wandsworth and Merton.  We loved every single one of the 20+ engagements and busking sessions, with highlights including:

For those that missed it, here’s a little clip from our YouTube channel:

As a new project in the area, we’ve been humbled by the way local community has welcomed and engaged with us, and look forward to providing the soundtrack to many more events in South West London throughout 2018.